Nikos Georgopoulos “From Abstraction to Representation”

When looking at Nikos Georgopoulos’ works of art and engaging with the various expressions and different subjects he developed during his short life, the observer wonders, justifiably in my opinion, about what is the common place that connects them all, what is the shared component that goes across the seemingly diverse pursuits, if it isn’t a pure interest in painting. That kind of interest the Art must serve, along with its thematic significance.

The artistic journey of Nikos Georgopoulos took the path in reverse, starting from abstraction and not representation as it usually happens. However, his abstract compositions maintain the links with the real-world and the forms, surfaces or traces of worn-out objects are always implied. These compositions are studies on texture and materiality of objects, where the painter experiments with various materials on paper aiming at conveying a tactile sensation as much as possible. This can be observed in those seemingly non-representational works which if closely looked at, they start to reveal traces of old worn walls, with apparent scars by time and natural elements, or maybe some old wooden door bearing the texture of rotten wood, or the view of the seabed when looked from above.

After his first abstractive period, his art takes an unexpected turn, both in terms of subject and technique, by depicting landscapes evoking a Neo-Impressionist mood, high sensitivity and lyricism. These works by Nikos Georgopoulos approach the beauty and the truth of nature through colour and light. This is achieved by the depiction of the impression of objects and not by their detailed representation. They maintain all that freshness of a fleeting glance at nature and painting * en plein air. It could be argued that the works of this period maintain an affinity with the works of the Greek painter Spyros Papaloukas, whom he admired. 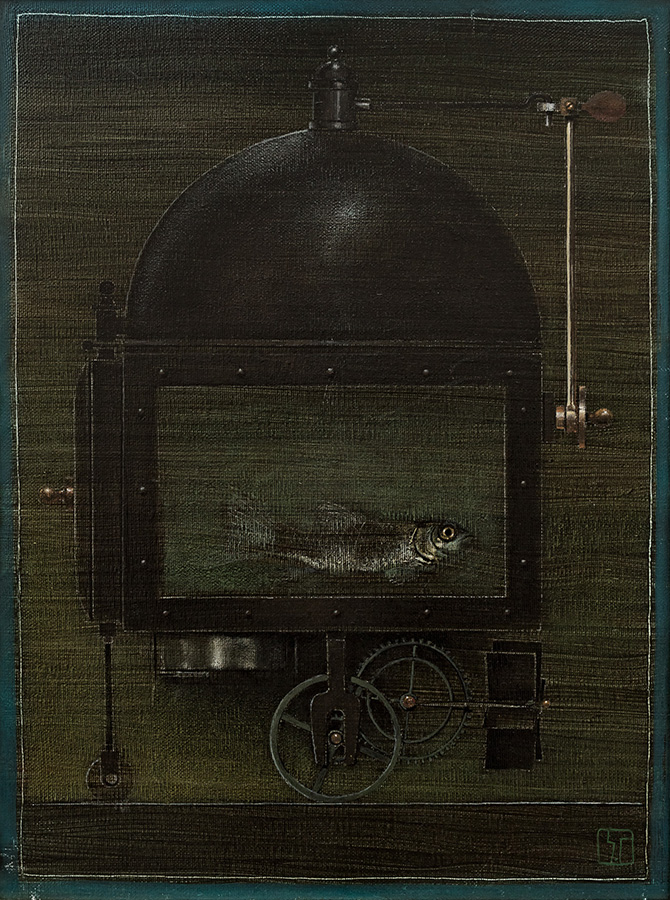 The series of landscapes is followed by a series of small-scale, mixed-art projects that depict marine patterns and other natural elements with tactile texture (fish, bees, etc.), which come across as fossils. Works which despite their detailed depiction, end up being abstract.

He returns to the image with a long series of very realistically depicted mechanical inventions. In this series of oil paintings, he deploys all his drawing skills, with the thorough depiction of the even tiniest components of a machine, like gears, screws, wheels, springs, etc. What is the purpose of these machines? Are they a sign of concern about the technological evolution of our times? Or are they an echo of the futuristic movement of the early 20th century in our era? In the first hypothesis, the artist does not appear to have such intentions. As to the second one, the history of art has taught us that futurism envisioned the future and the technological achievements, the triumph of man over nature, praising power and speed. To the contrary, the mechanical inventions of Georgopoulos seem to have travelled through time from the early days of the industrial era to this day. So, we conclude to assume that his approach is purely romantic, mainly based on aesthetic criteria. It seems to be a thematic pretext, like painting still life and that is how we accept it.

These works have a humble range of colours and tones that are similar to the materials a machine consists of, like iron, metal and glass. At the same time, he introduces the notion of symbol, which makes his compositions, to some extent, surrealistic.

His painting cycle is enriched and completed by a series of acrylic, vibrant and rich in detail painted fish. The pattern of fish is encountered in most periods of his painting art, either as a simple representation, or as an abstract imprint, or even as a surrealistic symbol in his mechanical inventions.

This exhibition of the Municipal Art Gallery of Chania aims at honouring the memory of this modest artist who chose to live and create in our town. His entire work lets us wonder for what he could further achieve, if he didn’t perish so young.

*En plein air or plein air painting is the act of painting outdoors. The term was used by the Impressionists to describe the method of depicting a landscape by painting it outdoors. This method contrasts with the up to then prevailing tendency of studio painting.

Nikos Georgopoulos was born in Athens in 1954. He studied painting at the School of Fine Arts from 1975 till 1980, initially under Yiorgos Mavroidis and later on under Panayiotis Tetsis, receiving a praise and a scholarship from the workshop of the latter. At the same time he attended a sculpture course at the workshop of Thymios Panourgias. In 1982, already married to Pagona Xenakis, a painter from Chania, whom he met during their studies, he became a permanent resident of Chania. In Chania, along with painting, he also worked as an art teacher in secondary education. He passed away in Chania in 2003, at the early age of 49. He held many solo exhibitions and participated in many group exhibitions in Athens, Chania, Heraklion and Rethymnon. His works can be found in private collections in Greece and abroad.

The Municipality of Chania presents with great pleasure to the art audience the painting exhibition of the late artist Nikos Georgopoulos, an artist who chose to live and create in our town.

This exhibition is a minimal tribute on behalf of the Municipal Art Gallery of Chania in memory of the artist, both for his artistic work and for his contribution to the education and aesthetic perception of our youth.

The work of Nikos Georgopoulos follows a peculiar morphological wander between abstraction and representation, in reverse compared to usual practices that have been established over the years.

His entire art is governed by the same seriousness with which he deals with the morphology of his work, whether abstract or representational. We are therefore called upon to approach its deepest message through this very perspective.

Being certain that this exhibition will also provide plenty food for thought, I invite the citizens of Chania, who have embraced our Municipal Gallery, to enjoy it.

The careful study and observation of the natural landscape, combined with an in-depth knowledge of the elements of everyday life and the matter surrounding us, were the priority and, as one could also say, Nikos Georgopoulos’ special talent.

Thus, we see him wandering from abstraction to representation, but without virtually abandoning the form which he likes to seek and accurately represent even to its slightest detail. This way he remains a lover of reality, with a cohesive personality and consistency in the execution of his work.

I would like to thank the art historian, Vasso Petroulaki, for curating the exhibition and the painter’s wife, Pagona Xenaki, painter, for kindly donating the works to the exhibition.

I invite the art-loving citizens and guests to pay a visit and enjoy this important exhibition, hosted at our Municipal Art Gallery.