The painter as a curator

The current exhibition at Chania Municipal Art Gallery is based on a selection of paintings from its permanent collection. This selection is signed by the vice-president of the Municipal Art Gallery, Dimitris Andreadakis who is a painter and a professor at the Technical University of Crete. It is the first time that a painter officially assumes the role of the curator in our town’s Municipal Art Gallery. This is not the first time however that artists take over the role of curators either because they see the exhibition they mount as an extension of their own work and an exploration of their taste or because they see the exhibition as another artistic project. As Daniel Buren said, artists often view “the exhibition as a work of art and no longer as an exhibition of works of art”[1] with the result that one cannot say “where the artwork ends and curating begins.”[2]

Such confusions between the curator and the artist are to a great extent a result of the expanded dynamic of art in recent decades, particularly since the 1960’s. Under the influence of conceptualism, artistic practice began to involve a number of areas and media that were up to then untouched by the purview of the artist. Such an area is that of curatorial practice. As much as we must understand the conflation of roles between artist and curator under the auspices of conceptualism, the selection in the current exhibition is not dictated by a concept that wishes to assume artistic status. The selection is rather motivated by the eye of the painter, an eye that is keen on painting and knows how to value the collection from the point of view of the métier, the profession, its traditions, customs and values as Jean Clair would say.[3] This is the reason that the third floor of the Municipal Art Gallery is painted in an extremely expressive cinnabar green color that accommodates the paintings in a very hospitable manner giving an air of late 19th century Paris to the great hall of the gallery.

There is a lot to be said about the eye of the painter, his view on things, particularly on works of other painters. It is reported by Pliny the Elder that the famous painter of antiquity Apelles was very generous, helpful and appreciative of his fellow painters, even of his antagonists.[4] Clearly, one needs such a generosity and appreciation in order to correctly appraise the works of others. For it is also clear that the artist’s view differs from that of the curator. In recent years, the artist’s view has become increasingly appreciated by several museums in the globe. It was Kirk Varnedoe in the late nineteen eighties that inaugurated the Artist’s Choice series, the practice of inviting artists to become curators of the vast collection of the New York Museum of Modern Art, a little after he became appointed as its director. The most notorious show mounted by an artist was the Head-On/The Modern Portrait curated by Chuck Close at MoMA from 10th of January 1991 to 19 of March 1991 in which Close abandoned the sparse arrangement of the modernist cube for the sake of frame by frame crowding, recalling the excessive 19th century hanging and infuriating many critics like Hilton Kramer and Lewis Kachur.[5]

It is the Renaissance legacy that dictated that the artist be not an artisan but an intellectual of equal ranking to the noblest in society. Sarah Pierce reports the 1648 petition of the court artists to the young king Louis XIV to found a French Royal Academy of Painting which would distinguish the work of court painters from artisans and would establish painting as a fine art “solely dedicated to the pursuit of virtue.”[6] From then until the 19th century French salons and the North American Armory Show, the artists have adopted an increasingly important role as curators. Yet, the artists are not curators and it is important to distinguish between the two vocations. It is thanks to this distinction that the artists’ work as curators is considered to be important.

For the artists develop a viewpoint that bears no necessary obligation to art history, to theory, to kinships among artists, to formal or any other considerations. Their curatorial approach is free and playful, the same they have when they create works of art and although it dares to make very bold and unexpected associations it results from an arbitration that is no necessarily grounded in theory, as is the case for curators. Being uninhibited by what is customarily known and grounded, the artists’ curatorial approach tell a story in Alberti’s sense[7] that may prove to be fresh and novel, provided that it is successful. This fresh view is the reason why many artists are often invited by the greatest museums in the world to organize an exhibition of their permanent collection.

In his classical phenomenological work Totality and Infinity Emmanuel Levinas wrote about the dimension of interiority that distinguishes the ego from the world and causes a resistance to totality from the part of the ego.[8] Interior life has its own time that does not coincide with the time of historical objectivity. Thus reality is not solely determined on the basis of historical objectivity but also on behalf of interior intentions which are personal and secret and disrupt such objectivity. These personal and secret intentions of which Levinas writes so eloquently often mark the artists’ approaches to curatorial practice. They are, properly speaking, a reflection of their own interiority and very often are hard to decipher being idiosyncratic and mysterious.

Having said this about the painter as a curator, it would also be important to inquire about the role of painting as an object of curatorial practice and the tormenting aporia that haunts many, nowadays, about whether painting is still a valid medium of artistic exploration or if it has been superseded by the current technical advances in image making. While it is true that digital technology has overtaken the domain of image production making both painting and its greatest 19th century rival, photography, obsolete, painting does resist the passage of time and these developments. As Christopher Reed contends,[9] a great part of postmodern artists returned to painting after the nineteen eighties not solely because of an obligation to the medium that educated seeing for centuries but also because they wished to start anew the adventure of art which had to a certain extent been saturated by experimentation. Painting has often been pronounced dead since the time of Pliny the Elder[10] but has nevertheless always managed to revive despite all odds and predictions. Another effect of the painter as a curator is to offer today, at a technologically advanced time, an integral reflection of what the adventure of painting as a whole amounts to and what it is about. I think that from this aforementioned point of view this exhibition is successful.

[2] Sarah Pierce, “With Practicality Comes a Practice: the Artist as Curator” in www.visualartists.ie/with-practicality-comes-a-practice-the-artist-as-curator, accessed 9/7/2020.

[4] Pliny the Elder, On Ancient Greek Painting, Book 35 of the Natural History, transl. from Latin to modern Greek by Takis Roussos and Alekos Levidis, Athens, Agra, 1995, #87.

[7] Leon Battista Alberti, On painting, transl. John R. Spencer, New Haven, Yale University Press, 1966, p. 91. For Alberti as for Aristotle, the most important task of the painter is the istoria, the story he/she wishes to tell, or the meaning she/he wishes to propose.

[9] Christopher Reed, “Postmodernism and the art of identity” in Nikos Stangos, ed., Concepts of Modern Art. From Fauvism to Postmodernism, London, Thames and Hudson Ltd, 1994, pp. 271-293.

The painting by Ioannis Stavrakis entitled “Port of Chania”

Ioannis Stavrakis’s 1897 The port of Chania painting was acquired by the Municipality of Chania in 1947, forming one of the first paintings belonging to the town collection. The painting depicts the 1897 dramatic events when the Ottomans set the town on fire and killed many of its citizens although this can hardly be seen due to the atmosphere of peacefulness, silence and absence that prevail. However small details like the Ottoman military procession exiting the Firka gate and the fleet of Great Powers at the horizon, indicate that this is not an ordinary morning view of the port. The composition is clear and splendid and the color is brilliant recalling the port scenes of the Venetian School of landscape painting and figures like Francesco Guardi and Giovanni Antonio Canal or Canaletto. One is also able to see elements of Constantinos Volanakis’s seascapes.

Ioannis Stavrakis was born in Heraklion in 1841 and died in Athens in 1909. In 1856 he suffered a nervous breakdown that left him deaf-mute. He studied at the Athens School of Fine Arts with Nikiphoros Lytras, adopting thereby the Munich School of Painting principles. After the end of his studies he settled in Chania and worked as a teacher of painting. He was the teacher of Florentini Kaloutsi and Dimitris Kokotsis. In 1892 he received an invitation from sultan Abdul Hamit to become a court painter in Istanbul. Most of his paintings are portraits although there exist some landscapes and a few still lives. He incorporated many popular elements in painting that remind the School of Eptanisa. Besides the Municipal Art Gallery of Chania, works of his belong to the Eleftherios Venizelos Museum and to private and public collections in Chania and abroad. He also painted hagiography following the Nazarene School. His wall paintings may be seen in the cathedral of Chania and several of his religious icons are in Heraklion too. (The text is based on Markos Marinakis’s book The Cretan painter Ioannis Stavrakis, 1841-1909, Heraklion, Kantartzis, 2006)
Dr Constantinos V. Proimos, Adjunct Faculty at the Hellenic Open University and independent art critic and curator 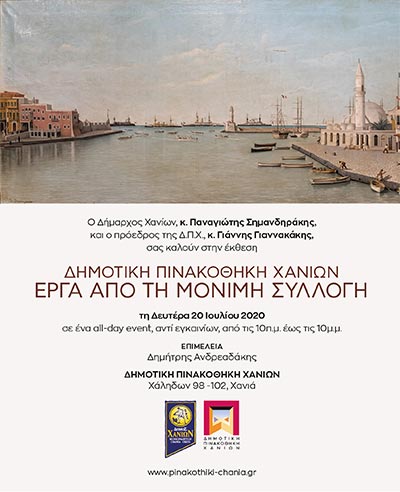